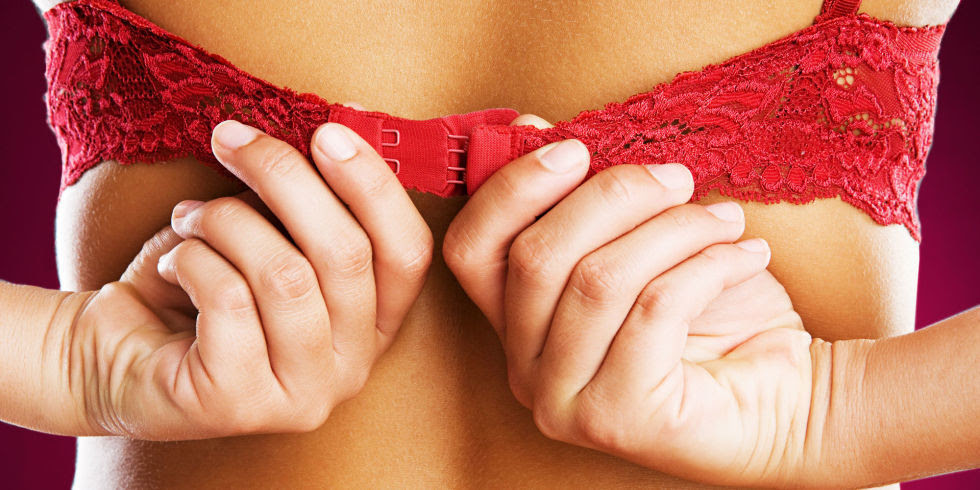 1. The pure relief you feel at the end of the day when you take them off. I've had this described to me on multiple occasions through a variety of different expressive mediums, and it sounds way better than how just taking off your underwear feels.
2. What it's like to own bras for different situations, like fancy underwear. Sure, we can go out and buy underwear that makes us feel fancy. But we could be wearing our 9-year-old lucky boxers under our prom tux and no one would know.
3. Going braless. We can go commando, sure, but that's not quite as uh … sanitary. Going braless brings all the freedom and gentle breeziness novelty going commando affords, without all the junk and butt sweat. It's all positives.
4. Color-coordinating your bra with your outfit. Most of the time, our underwear won't even be visible (and if it is, we're probably wearing jeans, and everything goes with jeans). We don't have to carefully budget out our underwear or think about what boxer briefs we're going to wear when. We reach in a drawer and throw on whatever. We could not handle making sure we have a bra to match our spaghetti straps. I'd probably just only buy white bras and make things easy.
5. How those sizes work. Unless we're buying a suit, we just deal with S, M, L, XL. With bras, there are way too many dimensions involved.
6. Having it "cut into your skin." Why would an item of clothing ever do this to you? This sounds horrible.
7. Having a piece of clothing betray you via underwire. Nothing we wear can just spring pain on you seemingly out of nowhere. Sure, we can get into some excruciatingly painful situations via the flies on our pants, but at least we're actively involved in that. We're not just walking down the street and suddenly our shorts are stabbing us.
8. Boob sweat. We won't understand this, but frankly, we have ball sweat, which I can assure you is worse.
9. Actually paying for them. Why are they so much money?
10. How quickly they seem to wear out. Apparently, bras aren't even good for a full year. You know how long guys' underwear lasts? Until our partner finds them in the laundry and throws them out without us knowing. And that can be decades.
11. Those weird band ones. You know the ones I'm talking about? How do they stay on? [Ed. note: I think he's talking about strapless bras?]
12. Choosing the right bra for a situation. When we're choosing our underwear in the morning, we have to ask ourselves, "Am I going running?" If the answer is no, then anything goes (otherwise we're throwing on some athletic underwear). Women seem to have a deep bra stable designed for a variety of tactical situations, like they're boob secret agents.
From: Okcityloaded