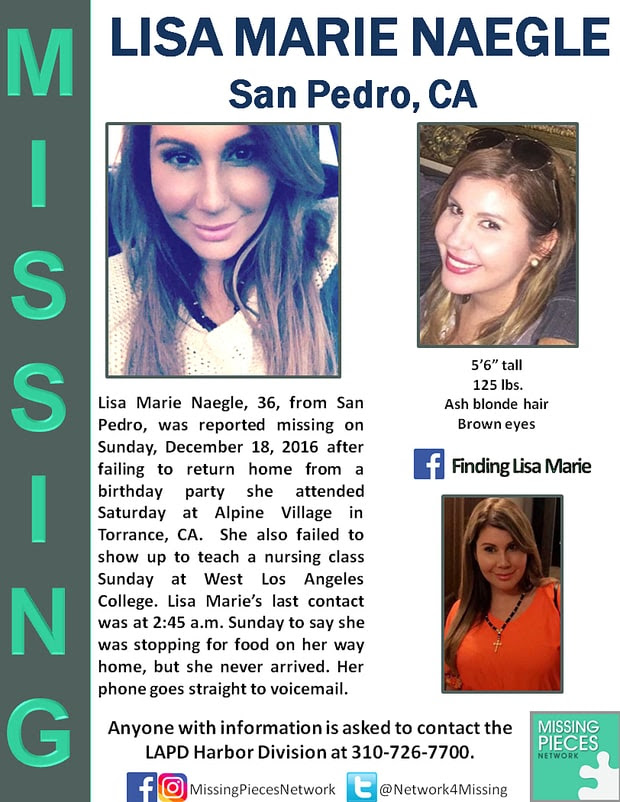 UPDATE 12/20 6:51 p.m. ET: Suspect Jackie Jerome Rogers has confessed to murdering missing Bridalplasty contestant Lisa Marie Naegle, TMZ reports, citing law enforcement sources. Rogers reportedly told police Naegle's body is buried in the backyard of his Inglewood, California home, law enforcement sources said he will be booked on murder charges later on Tuesday.
UPDATE 12/20 6:38 p.m. ET: According to ABC 7, LAPD have detained a suspect named Jackie Jerome Rogers after Lisa Marie Naegle’s family obtained security footage of Naegle and Rogers from early Sunday morning. According to TMZ, Rogers, a nursing student, is being held on suspicion of murder.
"We begged and pleaded that he'd come to our home to kind of give us details on what time, where were things, and when he left her, but while he was talking to us and telling us his story, multiple different times he said he absolutely did not go home with her, or did not take her home," Naegle’s sister, Danielle Naegle-Kaimona, told ABC 7 said.
Updates to come.
Original story continues below
Lisa Marie Naegle, a former contestant on E!’s 2010 reality series Bridalplasty, has been reported missing. According to KTLA, Naegle’s husband, Derek Harryman, alerted authorities on Monday after she didn’t return home last weekend.
Naegle, a registered nurse from San Pedro, California, reportedly attended a birthday party at Alpine Village restaurant in Torrance, California, on Saturday night. Her husband says he last heard from her when she called him early Sunday morning to say she would be home after getting food. Harryman told KTLA that Naegle sounded like she had been drinking and that she didn’t report to work on Sunday either.

"There's video footage that was just discovered from Alpine Village within the last hour showing my wife getting into a black SUV," Harryman told KTLA. "Her missing work, her not calling anybody, a million red flags.”

Harryman and Naegle's brother, Rafael Chavez, reported her missing and posted a plea on social media asking for any information.